The Season comes to an end for the Panther’s 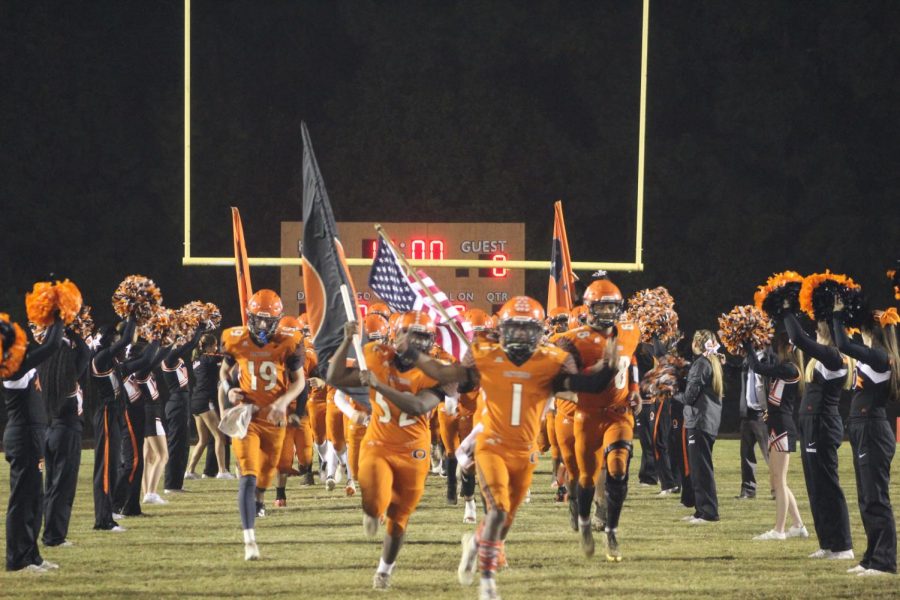 Panthers last game of the season.

Monday, November 5, 2018 marks the last night of the Orange panthers varsity football season this year at the Panther football stadium. When on the field with the players and being with all the action, you could notice what a strong bond they have here at Orange between the players. It’s more of a genuine family bond we have between our players, which made that night harder for everyone as we all realized the season coming to an end.

The Senior quarterback, Travis Ray, said, “Personally, I thought the high of our team this year was us sticking together, being teammates and brothers, and not turning on each other when times got rough. I know everyone on our team cares about one another, and it’s more of a family that we will have for the rest of our lives. When we are old and come back for class reunions, we will be able to look back at these years and remember all of the great memories we have shared together.”

Throughout the season there were many close games, Ray stated, “I think our low was not being able to finish games. We were in so many close games that we could have pushed through and not made careless mistakes and defeated the other team.” As everyone knows, to be a Senior in high school is probably the most important year, because it’s the last year of your high school career. I asked Ray as a Senior what has been his favorite memory over the past four years playing at Orange, He said, “My favorite memory in football this year was the first drive of the final start of my high school career on Senior night. I opened the game with a touchdown to Colin and at that moment it felt like 4 years of work and dedication showed everyone what I could do.”

Being a Senior it’s common for students to not know what they want to do for their future but for Ray, it’s a different story. When I asked him about his future plans when he leaves Orange High, he said, “Next year I plan on continuing in football, but if I don’t get my chance to I will get involved in coaching. I love and know so much about football, but I would like to expand my knowledge even more in football. My career in football is certainly not over, this is just the faze of it.”

After having a conversation with Ray , I talked to another player. His name is Zyon Pettiford, and he is one of the Wide Receivers. I asked Pettiford how he felt about this year’s season, He said, “I feel like the team did good, we were a young team which means that we didn’t have a large number of seniors but throughout the year we started playing better together.” There seemed to be a few minor setbacks for the team this year, Pettiford explained, “We should have taken practices more seriously, which means next year is going to be a different story. I feel like I should have done more to help the team and could have been a better leader because we lost some really close games, it’s sad that one of those was our last.” Pettiford also stated how the season was as a whole and what next will be different, He said, “It was a fun season, we really enjoyed working together as a team. I’m going to be a better leader and make sure we work hard no matter what.”

Come out to next year’s season to support your Varsity panthers as we are hoping for a new beginning and a fresh start for success!